Pick up a copy of Nimona and Beetle and the Hollowbones at the reference desk at Corporate Parkway branch. 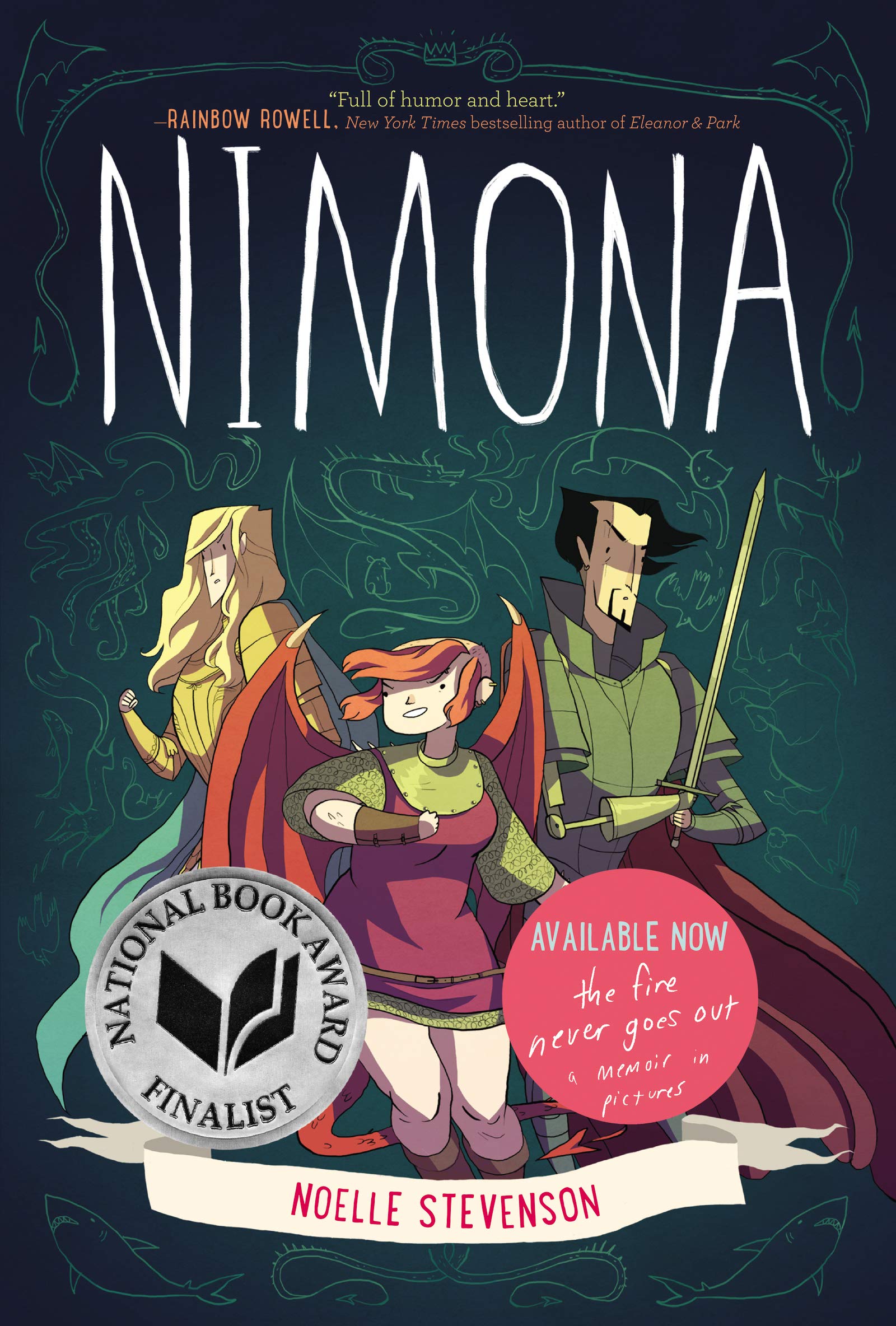 A not-so-bad villain fighting against a not-so-good hero teams up with a spunky shape-shifting heroine in a cleverly envisioned world.

Nimona, a plucky, punk-tressed girl, is determined to be the sidekick of the nefarious (in name only) Ballister Blackheart, the sworn enemy of the Institution of Law Enforcement and Heroics and their sporran-sporting champion, Sir Ambrosius Goldenloin. Blackheart, intrigued by Nimona's moxie and ability to shape-shift, takes her on, and the two decide they're going to take down the Institution. Nimona and Blackheart learn that the supposedly benevolent Institution has been hoarding a great quantity of a poisonous plant, jaderoot. As they delve deeper into its inner workings, they soon find that the lines that separate good and evil aren't simply black and white. Stevenson's world is fascinating: an anachronistic marvel that skillfully juxtaposes modern conventions against a medieval backdrop. Imbued with humor, her characters are wonderfully quirky and play with many of the archetypes found in comics. The relationships among her characters are complex and compelling: for an antihero, Blackheart dislikes killing and mayhem, while Goldenloin is not averse to cheating and trickery. Stevenson's portrayal of the relationship between good and evil is particularly ingenious, as is her attention to detail and adroit worldbuilding.

If you’re going to read one graphic novel this year, make it this one. (Graphic fantasy. 13 & up)

Beetle and the Hollowbones:

Though bustling with goblins, witches, ghosts, and skeletons, this beautifully drawn graphic novel addresses important questions facing even mortal kids. It tells the story of Beetle, a young goblin and aspiring witch who is torn between hanging out at the mall with pal Blob Ghost and serious study. When childhood friend Kat Hollowbone returns to Beetle’s town to apprentice with her sorceress aunt, it disrupts Beetle’s friendship with Blob Ghost as well as Beetle’s ideas about identity and relationships. The story quickly develops urgency as Kat’s aunt emerges as a villain intent on demolishing the mall, thereby endangering Blob Ghost, who is bound to that location. Layne’s renderings of her paranormal cast are highly evocative. Green-skinned Beetle has large, pointy ears and a tufted tail; skeletal Aunt Hollowbones has a spindly bird skull for a head. Climactic action scenes are expertly rendered. Diversity is a strength in this female-driven text, which features a tenderly portrayed LGBTQ+ love story between Kat and Beetle. Wise older women act as mentors, body diversity is casually positive, and Blob Ghost uses they/them pronouns throughout. Amid the fantasy elements, Beetle, Kat, and Blob Ghost text, video chat, post pictures online, and look at one another’s social media feeds—and Beetle is forced, grumbling, to take the bus to the mall.

Space is limited. Please limit family attendance to one parent or caregiver.

If you need accommodations for this class, please try to contact the Library at least fourteen days before the class, or immediately after registering.